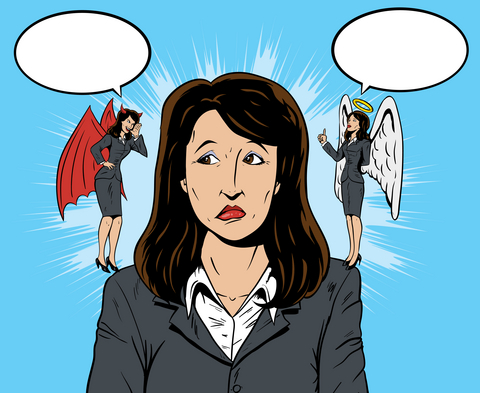 How to Improve Self-Confidence. Gwendolyn Can Help!

Who can you talk to about self-confidence? Maybe, it’s somebody like “Gwendolyn.”
Let me share a little about her…

I arrive at the hotel in Corpus Christi early, to check out the room and technical arrangements for my breakout session. The coordinator had emailed me to expect 25 attendees, tops. So imagine the shock of discovering a cavernous meeting room seating several hundred people. Stage, full screen video, the works.

It’s unexpected. That’s when I hear from Gwendolyn.
Yes, Gwendolyn, my twin who lives in my head. At times I hate her. This is one of those times.

“Patricia, you’ve messed up. Again! All set for two dozen people? Hah! Now you have to deliver in a lecture hall! Dummy, why didn’t you read the page about schedule changes?”
Things like that.

Gwendolyn …Ever so ready to pounce, triggering guilt and self-doubt. She holds onto a glitch and converts it into a cliff-hanger. Oh, there’s so much more to Gwendolyn. She tells me what to eat. She wants me to hold a grudge and blame…

If Gwendolyn is such a pain, why keep her around?
Believe me I’ve tried to forget her, to drown her out with gingersnaps. I’ve yelled at her. But Gwendolyn won’t go away.

Two things counter the self-doubting Gwendolyn.
First, she is part of me. (To get rid of her, I’d need a frontal lobotomy.)
Second, she lives in a very tight place – fear and loss of love.

Gwenny, let me hold you in Gram’s squeaky chair.
Rocking, rocking, back and forth.

I look over the lecture hall. Plenty of time to run off extra handouts. That’s why I got here early.
I can distribute them before things get started.
I’ll get off the stage and mingle with attendees.
I know how to read the audience.
Flash drive works fine. Darn good stuff.

Yes, Gwendolyn and me…Like it or not, we are together in this.

Do you have a Gwendolyn who drains your self-confidence?
When does she check in? I would love to hear how you acknowledge your “Gwendolyn”.

Negatives to Positives. A View from Outer Space
Four Ways To Be More Assertive: Apples and Aunts

Patricia is passionately committed to helping busy professional women Stress Less Live More. Professional women live with such high levels of stress... it's almost accepted as normal! Patricia believes that when you step out of go, go, go and explore the physical, mental, emotional and spiritual dimensions of well-being, you open the door to seeing and living life in a new way. She guides busy professional women through a six step empowering process to expand their capacity to make healthier choices and reduce their stress.

More posts from author
Tuesday, 31 January 2017 How to Lose Weight by Changing Just One Habit (A Big Promise for the New Year)
Wednesday, 28 December 2016 7 Ways to Survive Turbulence in the "River of Life" ... and Restore Peace and Balance
Wednesday, 29 June 2016 New! Launch of YouTube Channel
Sunday, 28 February 2016 The Bad Rap on Sugar
Wednesday, 06 January 2016 NEW! Insight-empowered Weight Management ... for a Healthy Body in 2016

Already Registered? Login Here
No comments made yet. Be the first to submit a comment

Relax NOW with my FREE audio-video Journey into Relaxation, which I specially created for women like you and enjoy the Frazzled to Free Blog